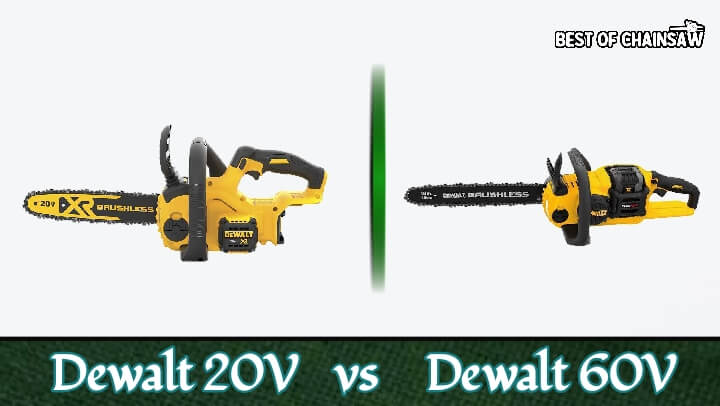 Choosing a chainsaw is one of the most important decisions that you will make when it comes to cutting down trees.

Dewalt offers two different models, a 20v and a 60v model. The differences in power might seem confusing but they are there for your convenience.

If you have a smaller job or don’t need much power then go with the 20v model, if your job is larger or needs more power then opt for the 60v model so you can get through it quickly and easily.

We put together a comparison chart of the Dewalt 20v  vs 60v chainsaw.

The following table is designed to help you compare features for each model so that you can determine which one best fits your needs.

The Dewalt 60v chainsaw is a powerful tool that can make light work of even the largest branches. With a chain speed of up to 38 feet per second, it can quickly cut through even the densest wood.

The saw also features a low-kickback bar and chain that helps to reduce the risk of injury, as well as a wraparound handle for improved control and comfort. The battery life is also impressive, with up to 150 cuts per charge.

However, there are some drawbacks to consider. First, the saw is quite heavy, so it may be difficult to use for extended periods. Second, the battery pack is quite large and can be cumbersome to carry around. Finally, the saw can be quite expensive, so it may not be suitable for everyone.

Overall, the Dewalt 60v chainsaw is a powerful and versatile tool that can handle even the most challenging jobs. It is a bit heavy and expensive but it is well worth the investment.

There are a lot of different chainsaws on the market, but the Dewalt 20v chainsaw is a standout option. It’s lightweight and easy to use, making it perfect for homeowners or DIYers. Plus, the 20v battery provides plenty of power to get the job done.

However, there are some downsides to consider before purchasing this chainsaw. First, it’s not as powerful as some of the other options available. Second, the battery doesn’t last very long, so you may need to have a few backups on hand.

Overall, the Dewalt 20v chainsaw is a great choice for anyone looking for an easy-to-use saw that doesn’t require a lot of power. It’s perfect for light-duty projects around the house. Just keep in mind the downsides listed above and you’ll be good to go! 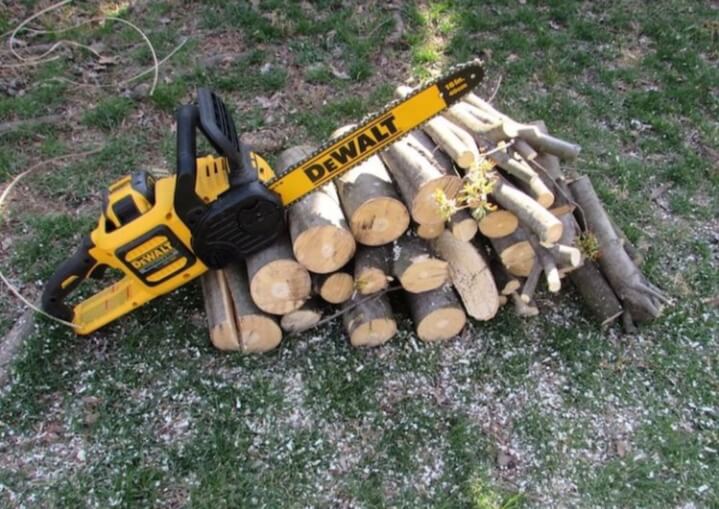 The second difference is size. The Dewalt 20v chainsaw is much lighter than the 60v model, weighing in at 9.8 pounds compared to 13.6 pounds. Therefore, if you are doing a lot of overhead work or need to use your chainsaw for long periods, the Dewalt 20v is probably not the right choice for you because it will wear out your arms much faster.

The power between these two models also varies greatly. The Dewalt 20v boasts 575 max watts (or .575 horsepower). The 60v model has 1050 max watts (or 1.1 horsepower). If you are looking for more powerful saws, then obviously the 60v is what you will want to go with; if not, then the 20v should suffice for most applications.

The next difference between these chainsaws is run time. The 60v model will require two batteries to operate (they are sold separately), while the 20v model operates on just one battery.

Additionally, the Dewalt 20v chainsaw has a run time of around 90 minutes, which can be extended up to 150 minutes if you purchase an additional battery.

This should be plenty of time for most users; however, if you are out in the field all day long, then you will want to go with the Dewalt 60v chainsaw instead because it has an impressive run time of around 100 minutes without needing a second battery.

In terms of speed, both models have a similar range at anywhere from 0-2800 rpm. However, the Dewalt 20v chainsaw reaches this speed much faster than the 60v model, so if you are looking for a chainsaw that can cut through material quickly, then the 20v is your best bet.

This might not seem like a big difference, but it can make all the difference when you are trying to cut through large pieces of wood. Additionally, the Dewalt 20v chainsaw is slightly lighter than the 60v model, making it easier to maneuver around.

This difference might seem insignificant, but it can be quite handy to have a tool-free chain tensioning system, especially if you are in a hurry and don’t have time to mess around with a hex key.

Dewalt is a popular brand of chainsaw. They have both 20v and 60v chainsaws. There are many similarities between the two models.

The first similarity is that they are both cordless. This means that you don’t have to worry about dealing with cords, and you can take them where you need to go.

Another similarity is that they are both lightweight. This makes them easy to use, even for people who are not used to using chainsaws.

They also have the same safety features, which makes them both safe to use. These features include a chain brake and an automatic oiler.

What are the main differences between the 20v and 60v chainsaws?

The 20v chainsaw is smaller and lighter than the 60v chainsaw. It also has a less powerful motor.

The 60v chainsaw has a more powerful motor and can cut through tougher materials. It is also larger and heavier than the 20v chainsaw.

Which chainsaw is better for beginners?

The 20v chainsaw is better for beginners because it is smaller and lighter, and will be easier to use.

What is the difference between 20v and 60v batteries?

The 20v batteries have a high capacity of 5Ah or 100wh. They can deliver up to 500 recharges over their lifetime. The 60v batteries have only a 2Ah capacity, but they provide 500 charges as well. Both types of batteries can be drained quickly depending on what you’re cutting with your chainsaw (wood vs metal). This means that it takes less time to recharge the batteries than it would if they had higher capacities – 15 minutes for either battery type.

Can I use any Dewalt 20v or 60v products with these chainsaws?

Yes. All of the Dewalt 20v and 60v products work with these chainsaws, including batteries and chargers. You can also use any type of Dewalt 20v/60v blades as well as other brands’ 20v/60v blades.

Can I just buy one battery for either the 20v or the 60v chainsaw?

No, you need two batteries to operate both chainsaws since they drain batteries quickly depending on what material you are cutting through.

What is the best way to keep my battery charged?

The charger that comes with your chainsaw will automatically turn off when your battery reaches 100%. If you do not let it reach 100%, it will not charge the battery to its full potential.

Can I use my chainsaw for commercial purposes?

No, the Dewalt 20v and 60v chainsaws are not meant for commercial use. They are designed for home use only.

If you are looking for a chainsaw to do light-duty work around the house, then Dewalt’s 20v model may be just what you need. This saw is best suited for trimming tree limbs and cutting logs into smaller pieces that can be handled by an average homeowner.

You will sacrifice some power with this specific tool, but if your goal is primarily domestic use it should have everything you need at a price point of $249.99 on Amazon.

For heavier tasks like felling trees or taking down thick branches off the ground, we recommend sticking with our 60v Dewalt which has more than enough juice to handle any job thrown it’s away.